Using a Time Lord and their most dangerous adversary to teach 6 to 12 year old’s how to code.

The BBC has unveiled a computer game called The Doctor and the Dalek, as part of the Make it Digital initiative to get more young people into computer coding.

It is voiced by Peter Capaldi and the story, starring a friendly Dalek, is written by Doctor Who series writer Phil Ford.

A browser game playable over the internet, it is aimed at six to 12-year-olds.

The coding challenges are linked to the curriculum and can be mapped against Key Stage 2 and 3 learning outcomes. 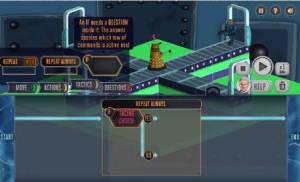 Going forward the BBC have plans to increase their footprint of bringing knowledge to the next generation under their “Make It Digital” initiative.

Alongside these BBC Learning projects we have some exciting children’s programmes coming out this Autumn that will help inspire our youngest audiences to discover the digital world and to take their journeys of digital discovery further. Dick & Dom’s Absolute Genius will become Appsolute Genius, Technobabble will look at the technology which will shape children’s lives, and Nina and the Neurons will go digital.

I have been using this with my kids to teach them some of the basics of coding and they have found the gameplay linked in with the coding tasks enjoyable. It was good to see them working round the problems presented to try and reduce the amount of commands used to match or beat the targets set. 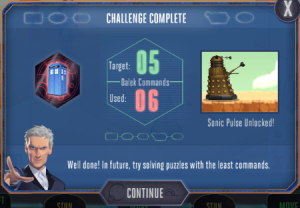 Yes I did do the challenges myself and also enjoyed it.

If you want to play the game you can find “The Doctor and the Dalek” at http://www.bbc.co.uk/cbbc/games/doctor-who-game

There is a lot of rising opportunities for the younger generations to now learn coding and computing from an early age. The UK Government has included a national curriculum for Key Stage 1 and 2.

The curriculum is available at http://www.computingatschool.org.uk/data/uploads/primary_national_curriculum_-_computing.pdf

This move should bolster entrants into the IT Industry in the future and more choosing it as a career, however also drive towards the Era of the Contextual Web. This generation of young people will develop key skills at an early age that they can just create the tools and applications that they need when they want them. Maybe they wont spend much time playing the xBox or Playstation, but coding them instead.

The next level of Innovation and entrepreneurship may just come from a 10-11 year old.

2 thoughts on “Doctor Who: Friendly Dalek teaches you to code”