Raspberry Pi have just released another 30,000 Pi Zero Units to the marketplace. Finally I have managed to order one after having the Pi Zero on my wish list for sometime now.

The demand for the Pi Zero has meant that they do not stay on the shelves long. This has created a high cost market for them on popular auction sites and suppliers have been limiting people to 1 unit only when they order (if in stock).

The folks at RasperryPi are using a different manufacturing process to that of the Pi 1,2 & 3 to keep costs down, however it looks like they are hopefully going to be keeping up with the demand.

“There are roughly 30,000 new Zeros out there today, and we’ll be making thousands more each day until demand is met.”

So whats new with this Pi Zero?

The Pi Zero has had a bit of a revamp between manufacturing batches and now contains a camera connector. source: Raspberry Pi Blog

The camera connector is about £4.00 which is the same cost as the Pi (£4.00). Then there is the cost of the Camera (approx £23.00), however it does make a low cost camera unit and opens up the possibilities of the Pi Zero. 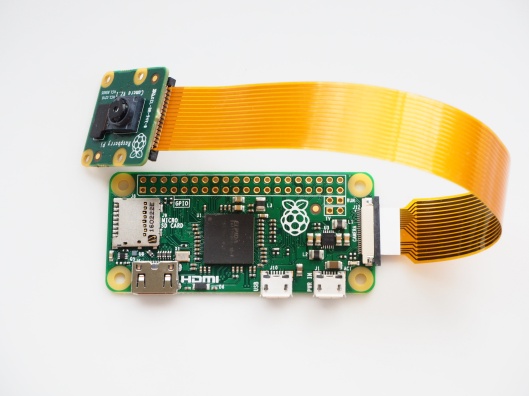 Just awaiting the postman now then time to do some more development stuff.