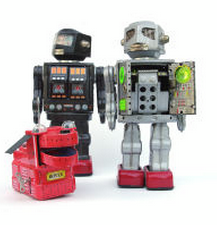 Following on from my blog post outlining an A-Z of Digital, here is “R is for Robots”.

What used to be Science Fiction is now reality as robots become an every day part of our lives. Even if you are not working with Robots they still have a big influence on your everyday life by making some of the things that you may use, such as a car or computer.

Isaac Asimov set out “Three Laws of Robotics” which in the main are obeyed by robots:

The exception to these laws at the moment are military based AI robots and there is currently a lot of debate around this subject and how far AI should be allowed to go.

When the term robot is thought about, it most probably conjures up visions of automated arms in a factory plant or a humanoid robot carrying out tasks. Lots of this is influenced by novels and movies. However robots do not always take this form and the term robot is applied to a number of scenarios such as “Robotic Process Automation” (RPA) which takes clerical tasks and automates them through the use of software based robots.

Through learning to program and the use of applications and Open API’s (Application Programming Interface) RPA can be used to automate parts of the business.

An example of RPA: I recently needed my windscreen repaired on my car. Through my insurance companies website (after logging on to verify myself) I started a claim for the repair. The process then presented a number of steps to help identify the damage to the windscreen through the use of pictures and choices. After entering the number of chips and location on the windscreen the process determined that I needed a replacement windscreen (Lots of motorway driving and lorries/cars flicking up stones off the road).

The next stage was to pass all my details to the windscreen company and all I had to do was choose the date and time for the replacement screen to be fitted. The only human interaction I had in this process was when the repair person came to fit the new screen. Following the fitting and signing electronically that I was happy with the repair the process finished by settling the claim (and excess) and sending a survey to complete about the process.

Although there was little human interaction in this process, it was a smooth transaction that resulted in a happy customer experience. There is however always an option to revert back to a human if needed.

Robots and the ability to build your own robot have also become readily available through the advancements in computing and cheap components such as the Raspberry PI and Arduino computing boards. Building a simple Quadruped robot through the use of an Arduino and some programming in Python demonstrates this ability.

Through the use of robots whether physical or software based, business can take advantage of these technologies to help automate the repetitive tasks that employees carry out and let them concentrate on the deeper tasks that need their attention – this leads to the Rise of the Cobots and their ability to help and work alongside employees.